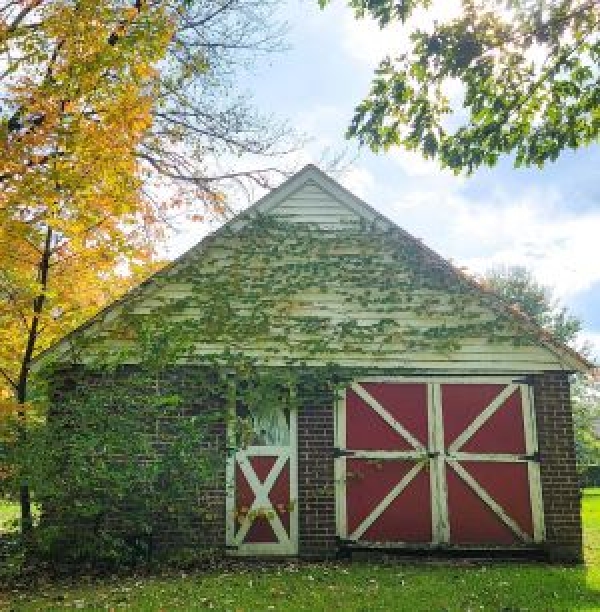 Mothers Day was yesterday, and I hope you had a great day with your mom.  I ran across this picture Sunday and it took me back and got me thinking.  My mom passed away last year at 94, lived on the same piece of land for 62 years.  She owned a 3 acre wooded lot that ended going into the MetoPark's Rocky River Reservation.  Enviable, try buying a piece of property like that today.

The barn in the picture was in her backyard, it had a few names over the years. The Barn, The Stable, The Old Crows Nest, and Bab's Barn. And It had many uses over the years too.  Of course we sold the house a few months back after she died.  I wish I had more pics of it.

The simple cinder block barn was built by a small farmer named Horn about 1940.  He had goats we understand, and there was a good sized pen that was attached to it years ago with access in and out. The house then was purchased by a big time Cleveland florist for a short time as a weekend retreat for his grand kids, and he kept the goats.  My mom and dad bought the home in 1959, (sans goats)  before I was born.  But I remember the pen, as it housed a sheep, Carmen, we had for a while for some reason, and a duck too.

In the early 1970's we took down the pen and built horse corral that attached as well, when my older siblings decided they wanted horses.  So for a few years we owned two and a pony, Echo Springs, Glow Bob, and Sparky respectively. They all lived in the barn with the barn cat, Fred Pepper, (the worlds biggest cat). About that same time, my mom decided that she wanted the upstairs of the barn to be an artists studio so she could paint, and so it was made so.  It was refurbished nicely and a large deck was built off the upstairs door, by us. And the studio was named, The Old Crows Nest.

In time it became a place to live for us kids in the summer time and that was cool, as you could play the stereo as loud as you wanted.  The horses were sold and the downstairs was converted into a tennis house, as my parents decided to build a tennis court next to the barn during the tennis boom of the mid 70's.  Then in time it became a winter storage garage for my uncles car, and then for me as I stored my first car in there for a few winters.  We also used to climb on the roof and watch the Berea Fireworks show as it was positioned perfectly for that.

After that, it kind of became a storage barn, and my mom had it restored as it had some issues.  She painted the doors too, and the horse faces you see, she did many years ago, and they still look great today. (I think -  haven't been there in a while) But Windy took this pic in November.  The horse faces were so good, her dog Summer, used to bark at them when she would run back there on occasion.

It has always had the vines on it, as they keep coming back, but that's part of the allure of it.  Bab's Barn has a story to tell, and now as it approaches 90, it's good to see it's still in one piece.  It has a long way to go to catch the original house that is now 169 years old.

My mom loved that barn and she loved the stories associated with it.

Hope you had a GREAT Mothers Day!

More in this category: « WYNN - COUNTRY MUSIC MEMORY LANE - Tracy Lawrence WYNN - Wynn At The Movies And More~! »
back to top